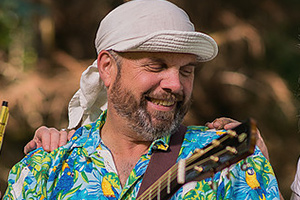 Mark Iler is a gifted singer/songwriter, performer and MC. Originally from Detroit, Mark has lived in the Puget Sound area since 1988.

Mark performs throughout the Pacific Northwest as a solo singer/songwriter, accompanying his wry acoustic folk rock/pop/humor ballads on various guitars and harmonicas – as well as in Humor & Heart with Jess and Julie playing 60’s and 70’s pop/rock, Folk, Trop-Rock & Originals. Mark, Jess & Julie (Along with Annie Henry on Fiddle) also play in a Celtic Band called Curlew’s Call.

Mark is in demand as a studio session player and live concert sideman, frequently appearing with Hank Cramer, The Kevin Jones Band, and a variety of solo artists. Mark generously shares his time as MC and sound volunteer for the Victory Music musicians’ co-op, hosting “open mics” and song circles throughout the Puget Sound area for over 20 years. He also currently hosts an Open Mic for the Arbutus Folks School in Olympia.

In addition to releasing his first ever CD (called “It’s About Time”) of Original music last fall, Mark has recorded 12 CDs with Hank Cramer. The work has earned critical acclaim. Heartland Public Radio named their version of “My Sweet Wyoming Home” the #5 Cowboy Song of 2007. Texas Public Radio’s “Random Routes” chose two of their songs – “Della and The Dealer” and “Two of A Kind” – for their Top Twenty of 2007.  The Western Music Association nominated Hank’s “Way Out West” CD as the best Traditional Album of 2007.

Even More about Mark

See more about Mark including discography and his latest CD release.
Discography and CD
Do NOT follow this link or you will be banned from the site!