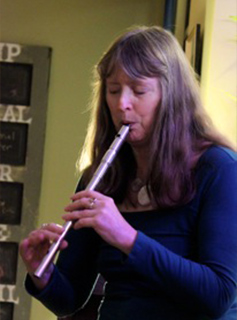 In her musical life, she is known as Jess McKeegan, a singing musician who also plays the Irish Whistle, Guitar and Mandolin. Jess enjoys singing some of the more "Bawdy" pub type songs as well as the sad beautiful laments of Ireland.

As a Celtic session player, Jess excels at playing the Irish Whistle (also known as the Pennywhistle or Tin Whistle) and singing sea shanties, ballads, and bawdy songs (her favorite).

In her youth in the Philadelphia area, Jess started out playing guitar and singing at local coffee houses then spent a few years singing and playing flute in funk and disco bands. She studied flute and music theory at the Bryn Mawr Conservatory of Music. Her love of traditional music and acoustic instruments pulled her back to her Irish roots 20 years ago. Since then she’s been a regular at Irish sessions in the Olympia area. Jess performed with the humorous nautical band Budd Bay Buccaneers for 7 years and these days with the high-energy Celtic band Curlew's Call. She has also performed with Hank Cramer since 2003 and appears on several of Hank’s CDs.

Jess & Mark along with Julie Bennett on Percussion also play in a band called Humor & Heart performing a variety of music including old Pop and Rock songs, Folk classics, Trop-Rock and Originals.

In her professional life, Jess is known as Jessica McKeegan Jensen and is the owner and Senior Attorney of Cap City Law PS, a full service civil law firm with an emphasis on holistic and collaborative law in Olympia.